Languages
Home » What Is CBD? An Introduction To CBD (Cannabidiol)

What Is CBD? An Introduction To CBD (Cannabidiol)

Cannabidiol (CBD) is one of over 80 chemical compounds found in the cannabis plant called cannabinoids. Cannabinoids bind to receptors in the brain and body and are responsible for the effects of cannabis, like feeling high, relaxed, or euphoric. Tetrahydrocannabinol (THC) is the most widely studied cannabinoid, known for its psychoactive effects and the reason you feel high.
However, demand is increasing for CBD after it was popularized in 2013 by the CNN special, Weed. In Weed, five-year-old Charlotte Figi treats her severe form of epilepsy, Dravet Syndrome with CBD, reducing her seizures from 300 a week to just one a day. Unlike THC, CBD does not produce a high and it even counteracts the effects of THC. So what is this miracle compound and how does it work? 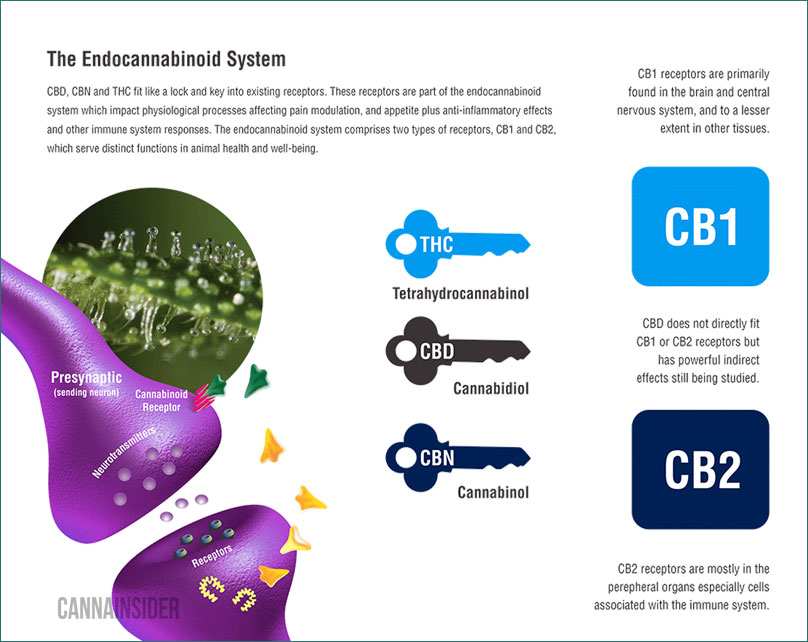 CB1 receptors are primarily found in the brain and when activated, play a role in memory processing, motor control, and pain regulation. THC binds to CB1 receptors – where the high feeling comes from.

CB2 receptors are primarily found in the immune system. CBD binds to these receptors and produces anti-inflammatory effects. CBD has gained much attention because of its promise as a medicine. According to a 2013 review published in the British Journal of Clinical Pharmacology, studies have found CBD to possess antiemetic (reduces nausea), anticonvulsant (suppresses seizures), antipsychotic, anti-oxidant, anti-cancer, anti-depressant, and anti-inflammatory properties. CBD provides relief from an array of maladies including inflammation, anxiety, pain, seizures, spasms, cancer, nausea, PTSD, depression, and infections.

You will not get high from CBD alone. Many cannabis strains contain both THC and CBD, among other cannabinoids, but the psychoactive effects come from THC. On the other hand, the therapeutic effects of CBD are more pronounced when combined with other cannabinoids and chemical compounds in what is coined, the entourage effect. The entourage effect states that the synergy of different compounds produce effects that would not be felt by the individual compounds alone.

Cannabinol (CBN) is another non-psychoactive cannabinoid known for its sedative effects. According to SteepHill Labs, low doses of CBN produce sleep aid effects comparable to 5mg to 10mg of the pharmaceutical drug, Valium.

CBD is gaining popularity among our four-legged friends. More companies are producing pet-specific products to address pain, seizures, inflammation, and appetite issues in cats and dogs. The American Veterinary Medical Association does not have an official position on cannabis and pets, for it is still illegal for veterinarians to recommend cannabis to treat patients. This has not stopped pet owners across the country, who are using the hemp-derived CBD treats on the market to treat pain and cancer symptoms in their animal companions. CBD is not approved as a treatment for pets according to the FDA, so companies need to be careful in how they market their products. The FDA has warned companies to change the language of their marketing away from promoting an “unapproved new animal drug.”

You might also enjoy Where To Buy CBD Oil

CBD is also gaining attention in alternative and mainstream medical circles. One year after Weed aired, the waiting list for the CBD products that treated Charlotte Figi’s Dravet Syndrome was more than 12,000 families. Researchers in Israel are delving deeply into research around epilepsy looking for a to see if cannabinoids like CBD may offer benefit.

Further, scientists and researchers are looking at how cannabindoids can possibly accelerate the death of undesirable or diseased cells as described by the authors in this medical journal.

There are numerous, hopeful personal accounts of people who have treated themselves with botanical remedies, and while promising, the science is still early. Research has largely been limited to preclinical studies carried out on animals. Rigorous clinical studies need to be done in order to push the science forward and further the role of cannabis in the medical mainstream.

CBD is Found in Both Hemp and Cannabis

Hemp is a variety of the Cannabis Sativa plant that is grown for the industrial use of its fiber. It’s history dates back over 10,000 years and is used to provide the raw material for textiles, biodegradable plastics, rope, nutraceuticals, construction materials, biofuel, food and more. Hemp is a tall, non-psychoactive plant, containing low levels of THC. CBD oil derived from hemp is legal in all 50 states under specific conditions.

According to the Controlled Substances Act of 1970, it is illegal to grow industrial hemp in the United States. However, hemp products can be legally sold in the US as long as they meet three criteria: 1) the hemp cannot originate in the U.S. 2) it must be lawfully imported and 3) the material must be derived from the “mature stalks and seeds” or “oil and cake made from seeds” of industrial hemp plants.

Hemp production is controlled and regulated by the U.S. Drug Enforcement Agency and it is illegal to grow hemp without a DEA permit. Several states, including Kentucky and Colorado, have legalized the cultivation and research of industrial hemp with permission from the DEA. CBD products sold in states where medical marijuana is legal can extract CBD from either industrial hemp or a CBD-rich strain of cannabis. However, there are notable differences between CBD derived from cannabis or hemp.

The synergy of the different compounds in cannabis work together to produce therapeutic effects on the body that are not achieved by the compounds individually. Essentially, the compounds work better together in what is known as the ‘entourage effect’. Because of this, CBD derived from cannabis can be more effective when administered with higher levels of THC and terpenes. The mixture of the compounds accentuates the desired effects of cannabinoids on the body. Clinical research has shown that a 1:1 ratio of CBD to THC is effective for neuropathic pain.

As a whole, industrial hemp still contains less CBD than CBD-rich cannabis strains and lacks the robust terpene and cannabinoid profile that cannabis provides. Large amounts of industrial hemp are required to extract a small amount of CBD, raising questions about contaminants. Hemp is a bioaccumulator, meaning it draws toxins from the soil that could potentially end up in the extracted oil.

It is important to understand how CBD works in the body to make an informed decision when purchasing products. ProjectCBD, a nonprofit dedicated to promoting and publicizing research into the medical uses of CBD, suggests purchasing CBD made from whole plant cannabis in order to get the best effects.

CBD is rapidly gaining popularity as a safe wellness and medical aid that offers similar benefits to prescription drugs, without the negative side effects. There are an array of CBD products on the market, so how do you go about finding what’s best for you? There are a few things to consider.

Where is the CBD oil coming from? Knowing the type of plant that the CBD is derived from and where it was grown can be helpful in assessing the quality of the product.

What extraction method is used? 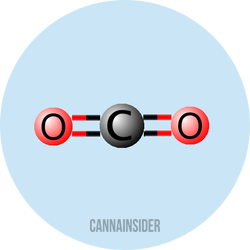 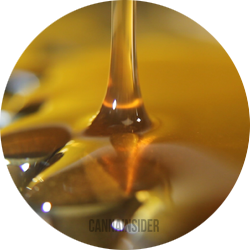 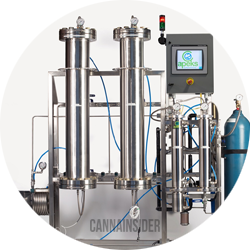 There are different extraction methods for pulling CBD from the plant. Using solvents like petroleum or naphtha can produce residuals that could be harmful to your health, especially in patients with compromised immune systems. Ethanol and olive oil can be used as a safe extraction method, although these oils retain the chlorophyll from the plant producing an unpleasant taste and dark color. The chlorophyll can be filtered out of the extract, but cannabinoids are lost in the process reducing the potency of the oil. Supercritical CO2 extraction is popular in the industry because it produces clean, quality oil that is safe with little processing and without toxic solvents.

Has the product been tested?

Check the label to see if the product has been tested for potency, pesticides or residual solvents.

What form does the product come in? CBD products can come in the form of edibles, lozenges, beverages, tinctures, gel caps, sprays, and more. The delivery method is a personal preference and one method may work best for your lifestyle. Another option is vaporizing. Vaporizing cannabis doesn’t burn the flower the way smoking does. Smoking releases toxins similar to cigarettes. Perhaps One study found that ammonia levels were up to 20 times higher in marijuana smoke than in tobacco smoke, although the researchers noted this could have been affected by the nitrogen-based fertilizers used to grow the cannabis.

Oil can be vaporized through CBD vape pens or e-cigarettes. In August 2016, UFC fighter Nate Diaz was seen on television vaporizing at a post-fight press conference. When asked what he was vaping, Diaz responded, “It’s CBD, it helps with the healing process and inflammation.” Vaping is a cleaner, more discreet way than smoking to deliver cannabinoids. The downside of vaping oil is that the oil may contain harmful residual solvents depending on the extract process. The delivery method is ultimately a personal preference, so consider the form that works best for you when shopping for CBD.

Does the company have customer support? Is there someone that you can get in touch with to answer your questions? If you Google the company, do they have a good reputation? Have they received a warning letter from the FDA regarding the marketing of their products?

GW Pharmaceuticals has produced the first prescription medicine derived from cannabis, Sativex. Sativex is an oral spray that contains a 1:1 ratio of THC to CBD. Sativex is approved in the UK, Spain, Canada, and New Zealand to treat spasticity due to multiple sclerosis. It’s also approved for the relief of neuropathic pain and advanced cancer pain in Canada. Sativex is not currently available in the United States.

When considering dosing, it’s best to know what research has been done regarding the ailment you’re looking to treat. GW’s research found that 1:1 THC: CBD extracts provided the most therapeutic relief across all categories studied – sleep, pain control, and muscle spasms. High CBD strains of cannabis are considered those with 4% or more.
Interested in learning more about the benefits of other cannabinoids?
We’re just beginning to understand the medicinal properties of CBD and you may want to discuss using CBD with your doctor. Where do you start? Medical cannabis is still generally misunderstood and has not yet entered the mainstream medical community. It is legal to discuss using CBD with your doctor, although he or she may not be well informed on its benefits. Sharing any research that you’ve found and being open about your reasoning for looking into CBD can set the stage for a good discussion.

This November, at least nine states will decide whether to legalize either the recreational or medical use of cannabis, including populous California and Massachusetts. Twenty-four states have removed barriers to researching industrial hemp. The Industrial Hemp Farming Act of 2015 has been proposed in Congress. This bill would amend the Controlled Substances Act to remove hemp from the definition of marijuana and subsequently open the doors to research and production. Several years after CNN’s Weed, more and more people are stepping forward with their stories of how CBD has positively treated their medical conditions and overall quality of life. As legalization marches forward, science will follow suit and we will learn more about the vast benefits of this cannabinoid. We are just scratching the surface in our understanding of the powers of this plant. Staying informed and deciding what’s best for you is vital as politics and medicine catch up with nature.

WHAT IS CBD?
NCI Drug Dictionary