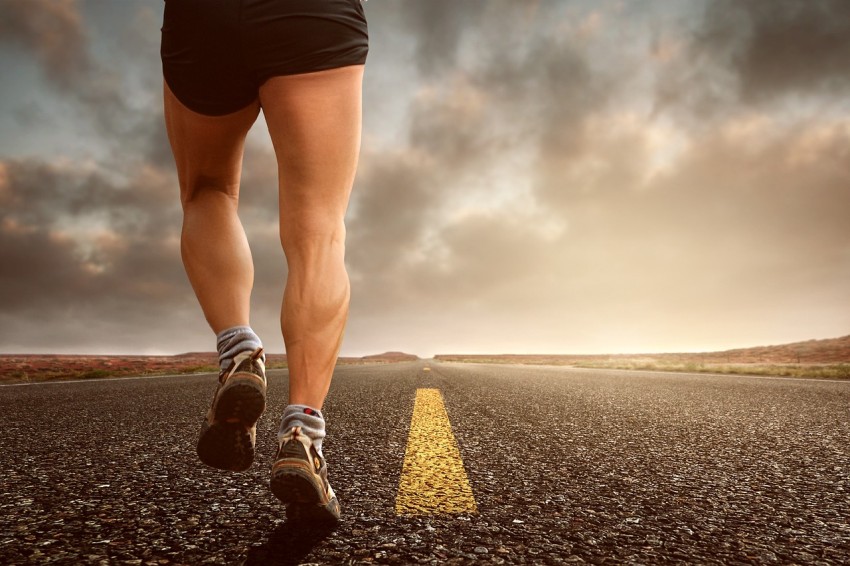 The wider mainstream interest in the cannabinoids’ impact on health has not gone unnoticed in professional sports. Although the officials and professional athletes have been looking at cannabis suspiciously so far, mainly due to its psychoactive ingredient THC, in the recent years it has begun to change. There are more and more reports of beneficial effects of cannabinoids, especially CBD, on athlete’s organisms. At the same time, the natural components of hemp seem so safe to use, that some of the largest sport organizations, urged by the public, scientists and the athletes themselves, have changed their attitude towards cannabinoids, crossing off cannabidiol from the prohibited substances lists. Better even, CBD is gaining more and more acceptance as a mild natural dietary supplement for athletes. Can CBD really be useful for those who leading an active lifestyle, improving their performance or protecting them against injuries? Everything suggests that the answer is yes – let’s look into this, then.

The popularity of CBD among athletes has recently become a hot topic, largely due to the decision of the World Anti-Doping Agency (WADA), announcing the official removal of cannabidiol from its prohibited substances list effective next year. Undoubtedly, the WADA’s rection has been prompted by the case of Nate Diaz, an MMA fighter openly vaping CBD during a press conference after a lost fight. The player was punished with a warning by the American Anti-Doping Agency, but the case has grown big enough to attract the attention of the media, fans and other athletes. This was not the first time when athletes raised the issue of benefits of natural CBD supplementation (let us recall the Denver Broncos’ players’ call to speed up the research on CBD), but by far the most famous one. There are also dozens of anecdotal reports from outside the professional sports circuit regarding the use of cannabidiol by amateurs. To understand how CBD can help those practicing sports, we should take a closer look at the basic mechanism how the most important cannabinoid works in our bodies.

How CBD Works in the Body

Nate Diaz praised the analgesic and anti-inflammatory effects of the CBD, ensuring that he reaches for it after each fight. Those familiar with Conor McGregor’s, to whom Diaz had lost the fight before the press conference, fighting style, or just knowing the first thing about MMA, can understand that Diaz was, at the moment, an expert on the issue of pain. Yet under no circumstances should CBD be reduced to the role of an ordinary painkiller. The array of its benefits is far wider.

CBD – cannabidiol – is one of dozens of cannabinoids, natural active substances actually found only in cannabis (Cannabis Sativa L.). Apart from the infamous, psychoactive THC (tetrahydrocannabinol), CBD is the most common of these compounds, and in the case of hemp products (let us remind you, only such products are legal in Poland), in which the THC level is drastically limited, CBD is the most common cannabinoid found in them. Cannabinoids affect our innate endocannabinoid system – an increasingly well-known internal system, whose function, is, roughly speaking, to regulate and stabilise the functioning of various organs (as well as other systems) of the human body. The CBD-rich hemp dietary supplements influenc all those parts of body, where endocannabinoid receptors can be found.

Without going into details, let’s list those properties of CBD which can be the most interesting for athletes. The research suggests that the CBD most likely has: analgesic, anti-inflammatory, antipsychotic, sedative, appetite- sleep-regulating, anti-nausea effect. It can also relieve muscle tension and joint pain. It should be immediately noted that what we are discussing here are the potential effects, as CBD is still being investigated, while the only unconditionally confirmed area of CBD’s therapeutic action is its anti-epileptic effects, yet this one only concerns cannabidiol as a medicine. It is worth emphasizing that this article only discusses potential properties of hemp products with the status of dietary supplements.

Just this cursory review of the potential properties of cannabidiol, combined with the indication that what we are talking about here is supplementation, not „therapy” of any sort leaves no doubt that CBD is not a „wonder drug” of any sort. It is already clear that it can be useful for post-workout supplementation in particular, speeding up the recovery after a hard training session, but it does not look like it would have a significant impact on the performance alone. Some insights in the usefulness of CBD as a dietary supplements for athletes can be provided by an overview of the anecdotal reports of the amateurs themselves – bearing in mind, that such stories do not claim to be in any way ‘scientific’. Scientific research on CBD as such is still scarce (although the situation is changing dynamically), not to mention research into CBD’s specific applications for athletes. This is why we have to rely heavily on the scant relations of the athletes themselves.

The most well-known is the example of American footballers from the Broncos club who used CBD dietary supplements to alleviate pain after games matches and minimise the time needed for the post-workout recovery. The CBD, however, was (and still is) included in the list of substances prohibited by the restrictive organization watching over America’s beloved sport. This is why the Denver team lead by the former Broncos quarterback Jake Plummer has issued a petition pushing for research on the matter and possible removal of CBD from the list. It is worth noting the main line of argument: cannabidiol is defended not so much as an exceptionally effective painkiller (which it is not), but rather as a way to curtail the use of dangerous opioid analgesics, such as the infamous Vicodin. The surprising synergy of CBD and opioids is a fascinating topic, but here it is enough to pay attention to the CBD indirect effect – the use of CBD-rich natural dietary supplements is not only safe in itself, it also protects against the danger of overdosing on opioid analgesics, which is a real plague in the US – not only among athletes.

Fortunately, most people practising sports do not train as hard enough to be in the need of taking opioids after the training sessions. Still, amateurs may enjoy, the same mild analgesic effect of CBD, which, combined with its anti-inflammatory properties, can enhance the post-workout recovery. For each training is (by definition) the stress we put on the body, for the training to be effective the pain threshold would often be near. Apart from the proper post-workout regimen, it will not hurt to bring relief to the muscles and joints with plant-based supplementation, also administrated for example topically (CBD-rich oils or ointments will work best here).

Other user reports also concern post-workout effects: primarily in terms of sleep regulation and relief of nausea after a hard workout session. Although everything indicates that CBD can actually show beneficial effects in these areas, it would be good for sports enthusiasts to recall that if their training results in vomiting and nervous insomnia, something is probably wrong here.

However, since we have already mentioned it, appetite-regulation alone can be counted among more reasonable CBD applications. Everyone practising sports knows how important a post-workout meal is – and how difficult it can sometimes be for your squeezed belly to force itself to digest it.

Among anecdotal amateur relationships, you can also find praising ones taking larger quantities of CBD supplements before training, which would supposedly “raise the pain threshold” and allow one to train longer and more effectively. We must definitely discourage such use. Although the CBD itself is 100% safe, even its slight analgesic effect when enhanced with higher-than-recommended dose can confuse us in assessing our strengths effectively exposing us to an injury. Let us not forget that pain plays an important role of a warning signal for the body!

Among the examples of pre-workout applications of CBD dietary supplements, we have found one which provides with an interesting insight into how cannabinoids as such work. One of the amateur athletes carried out a very non-scientific experiment on himself, and after taking a hemp-based supplement went out for a longer run, during which he felt the characteristic “flow” to an extraordinary extent. Before we start mocking, that the runner might have mistakenly reached for a product rich in THC (the subject was from Colorado, where also psychoactive cannabis products are legal), or (quite justifiably) refer to the placebo effect, it is worth paying attention to this interesting intuition. The effect experienced as “flow” has its scientific name – it is known a “runner’s high” associated with the action of anandamide … the main endocannabinoid in our body.

Named after the word ananda in Sanskrit, meaning „bliss” or „elation”, anandamide is the main neurotransmitter regulating the endocannabinoid system. It shows high affinity with the majority of cannabinoids of plant origin –THC can successfully imitate it by activating the endocannabinoid system receptors. CBD acts more indirectly – it inhibits the action of enzymes breaking down anandamide in synaptic spaces, allowing for the longer and more intense effect’s of the „bliss molecule”. Considering that anandamide is responsible for the feeling of state of flow – concentration, elevation and reduced pain sensation experienced during prolonged physical activity, pre-workout CBD supplementation may be actually useful for people practicing typical endurance sports – such as running

Should cannabis be considered doping?

The fact that cannabis was included in the list of prohibited substances for athletes following the surge of anti-drug panic is no mystery. When it comes to marijuana – a form of hemp with a high content of psychoactive THC – the matter is simple. Although it may seem that the weed, with its drowsy effect is the opposite of a doping, it is actually considered a performance enhancer due to its bronchial dilatory effect – hence, its exclusion from professional sports is quite justified. There is also the question of fair-play: the issue of the athletes reaching for a drug illegal almost everywhere in the world. Let’s leave the moral dilemmas of this ilk on the side. But what about CBD and other hemp products?

Here the issue seems simpler: ever-louder appeals of the athletes and scientists, combined with the CBD’s ability to reduce the use of really dangerous substances (opioids) and certain benefits for users (though not strong enough to provide them with an unfair advantage) make removing the CBD from the prohibited substances list just a matter of time. It can be expected that (as is the case of other hemp-related laws) after being approved by the American legislator, cannabidiol will promptly be accepted around the world.

Although the potential impact of recognition by the global sports community on the mainstream acceptance of CBD and hemp products as such should not be underestimated, doping is largely a technical issue relevant to a small group of professionals. But what about a much wider group of people practising amateur sports to stay healthy? (probably no one doubts that professional sports have little in common with being healthy) Can they also benefit from CBD supplementation?

The answer is simple – yes. The pro-health effect of dietary supplements such as CBD hemp oils ideally suits the challenges that physical exercise poses to the body. It is particularly worth recommending to use CBD after training – in order to calm down, relieve joint and muscle pains, protect joints and prevent inflammation. The best bioavailability will be ensured by having CBD with the post-workout meal (up to two hours after training), with a certain amount of fats.

Finally, it is worth remembering a few basics. CBD hemp oils available in Poland have the status of a dietary supplement, and athletes should treat them as such. They are not miraculous agents that magically improve their performance, or even – “heal” injuries. Athletes should also restrain to normal dosing recommended by the manufacturer of any CBD-based supplement.